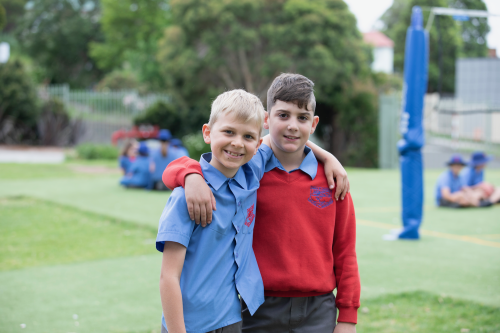 Please see the below for more information on the history of our school and its guiding foundations. You can also Meet Our Staff here.

Our School Motto and Crest 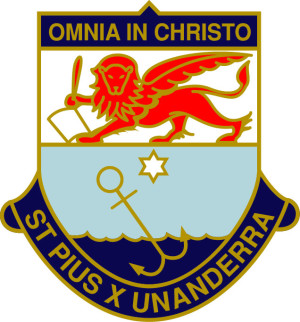 Our School motto is ‘Omnia in Christo’ – Restore All Things In Christ.

Our School crest is a replica of the Coat of Arms of St Pius X. It has the shape of a shield and it is divided into three sections, the deep blue of the sea, the azure of the sky and a white field dominated by a lion. The crest is a reminder of the City of Venice, of which St Pius X was Patriarch for nine years.

Venice had a glorious tradition, its fleets sailed on every sea, carrying the flag of St Mark, the patron Saint, even to the shore of pagan lands. The sea, the anchor, the star in the sky and the lion with the book and sword depict the history of Venice.

However the symbols have also a deeper significance, which is expressed by the words at the top of the crest – ‘Ominia in Christo.’ The lion is portrayed in papal red, for strength, power and courage which are properties of our faith and virtues which we endeavour to develop in all students. The Silver Star symbolizes heaven, our external destination, our faith and guiding light. The anchor reminds us that we will reach this goal by placing our hope and trust in God. 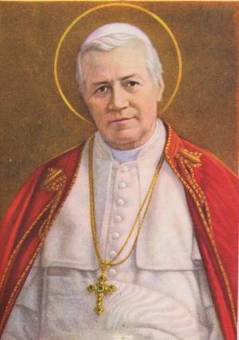 St Pius X, or Giuseppe Sarto, was born in 1835 at Riese, Northern Italy, the second eldest of ten children. Though poor, his parents valued education and Giuseppe walked 6 kilometres to school each day. He was brought up in a poor family but was able to lift himself from his modest beginnings through his sharp mind and academic brilliance.

Ordained to the priesthood in 1858, Fr Sarto quickly became known for his charity and education, especially of the poor. His work was recognised by the church when he was made a bishop in 1879 and a cardinal in 1893. Cardinal Sarto was elected Pope in 1903 at the passing of Pope Leo XIII, taking the name Pius X.

His Papacy extended from 9 August 1903 to 20 August 1914 and was noteworthy for a number of achievements: codification of Canon Law, promotion of scientific study of the Bible, more modern liturgies and church music and many social justice initiatives. He is often called the Pope of the Eucharist because he made Holy Communion available to younger people “at the age of reason”. His overriding concern was to renew all things in Christ.

Pope Pius X was canonized on 29 May 1954. The story of St Pius X is one of triumph in adversity through hard work and study and he is held up as an example for all the students, staff and families at our school.

Our school Feast Day is held on 21st August.  A whole school Mass or Liturgy, special treat for the students and fun activities are usually planned to celebrate this special occasion.

History of Our School

Owing to the shortage of staff, St Pius X did not commence operation until 2nd February 1960. The school was staffed by the Sisters of the Good Samaritan who travelled each day from St Mary’s Convent, Wollongong.

The first school day was made a memorable one as it was commenced with Holy Mass celebrated in the Immaculate Conception Church, at which Sisters, parents and students attended. The Mass of the Holy Spirit was chosen and celebrated by Father John Raccanello, PSSC. The entire congregation sang the Hymn of the Holy Spirit. At the conclusion of Holy Mass, Sisters, parents and students were blessed with a relic of St Pius X, under whose patronage the school had been placed.

“After Holy Mass, we proceeded to the school where one hundred and twenty little ones were enrolled for Kindergarten, Year 1 and Year 2 classes. As in all pioneer work, the first few months were not easy and as there was very little equipment one can readily imagine the excitement as cartons and packages arrived to be opened. One hundred and twenty pair of eyes and hands were to the fore”  — Sr Mary Hugh, SGS, First Principal

It became apparent over the next few years that extensions to the school were needed. Father John Raccanello planned and commenced the extensions which consisted of the Sixth Class classroom and hall. These extensions were opened by the Bishop in 1965.

Further growth necessitated more extensions and the double storey classroom block was planned and built under the guidance of Father Conrad. These additions were opened in 1974.

In 1975, the Sisters of St Joseph assumed the administration of St Pius X School and their involvement in the school continued until the end of 1980.

As the parish grew, more accommodation at the school was required and Father Victor organised the purchase and installation of three demountable classrooms. A new brick toilet was also built during this period.

From the beginning of 1981, St Pius X has been under the leadership of lay principals.

A rapid growth in the new areas of the parish again raised the need for additional classrooms at our parish school. As well as this, over the years a need for a parish hall became apparent.

These buildings were blessed and opened by Most Reverend William Murray DD, D.Sc SOC AM on 14th November 1992.

In the following year a toilet for special needs students and ramp was installed, having been funded by a Government Grant.

To recognise the great contribution of the Sisters of St Joseph to St Pius X School and to acknowledge that Blessed Mary MacKillop was to be beatified, a Mary MacKillop Garden was established in the school grounds in 1994.

St Pius X School was then fortunate to receive a government grant to extend the Library and Administration Centre.

On August 20 1996, the Most Reverend Philip Wilson, DD JCL, Third Bishop of Wollongong, blessed and opened the new Library and Administration Centre. The library was named the Polding Library to recognise the contribution of the good Samaritan Sisters who had given so much love and service to commence and guide the school for its first fifteen years.

During 1996 a covered walkway was constructed adjacent to the administration Building and this was funded by the Parents & Friends Association. Further improvements undertaken by the P&F were: the establishment of a rock garden under the stairwell, planting of shade trees around the quadrangle and the provision of extra seating under the trees.

In 1997, the Hargreaves Street entrance was improved with a new fence and then in 1998 with the support of parish priest, Father Mark O’Keefe, a new fence was constructed on the south western end of the school.

The P&F also funded the covered walkway beside the toilet block and in 1999 further concreting on the eastern side of the hall occurred.

Between 2008 and 2011, with assistance from the government, we were able to refurbish classrooms, construct a covered outdoor learning area, build 2 new classrooms, toilet blocks and build the MacKillop Learning Centre which caters for the needs of 21st century learners.

Past and Present Principals

Take a Virtual Tour of Our School